In this SPOTLIGHT, we showcase our grade twelve student Raunak Sandhu and his achievements. A month ago we were notified that Raunak was awarded the coveted Schulich Leaders Scholarship (valued at $80,000) by the University of Calgary, and is now part of an esteemed network of national STEM scholars at one of Canada’s leading universities. This accomplishment is worthy of much recognition and is a great opportunity to showcase the caliber of talent at our school. The “Schulich” is the largest scholarship to date awarded to any Renert student, and reflects Raunak’s commitment to excellence, perseverance, and dedication to the causes that he cares about.

Since coming to Renert (on day 1 of our first year) Raunak excelled in mathematics. He completed his math diploma exam (100%) in grade 9, and took university level math courses in high school, earning an A+ grade in them all. During his high school years, Raunak has also worked as a tutor at the school, connecting with the younger students and giving back to the community that has supported him. In addition to his interest in the STEM fields, Raunak has developed a strong interest in business. In his grade 11 year, Raunak took a business course led by Dr. Noreen Irvine, a University of Calgary business professor who emboldened his interest in entrepreneurship. He enrolled and completed a university-level accounting course and traveled to an international entrepreneurship conference held in Portugal by the European Innovation Academy (EIA).

The EIA is one of the world’s largest international entrepreneurship programs, attended by many prestigious universities. During the course of the program, students create startups, and designate roles to each member of the team. Raunak joined a group of two computer science students, one from Berkely and the other from the University of Michigan, as well as an Economics major from Berkely and a Portuguese student entering her masters of biomedical engineering.  Raunak was given the opportunity to lead his group as the CEO, being  the only high school student to serve As A CEO at the program.

In addition to his academic achievements, Raunak is also an active participant and leader at Renert, serving as the team captain for the school’s volleyball team and playing on the basketball team for multiple years. Coming back from a series of losses, the volleyball team upset many larger schools and was able to win the first-ever championship for Renert.

Outside of school, Raunak is a competitive badminton player, and competes across Canada.  Having placed in the top three in both national and provincial tournaments, Raunak trains many hours a week at the Glencoe Club.  At Renert, he founded our badminton club, demonstrating his leadership and his coaching abilities.

Winning the Schulich Leaders scholarship is momentous and well deserved. We are very proud of our graduate Raunak Sandhu and of his achievements to date; we also know that this is only the beginning of greater things yet to come. 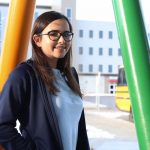 In the Spotlight: Serena Giga