1
0
Another year, another Kangaroo Math Contest, and another award ceremony, that was held at Mount Royal University on May 18th. Kangaroo is the largest international mathematics competition, with over 50 countries represented, and more than 6 million competitors worldwide. There are twelve levels of participation, ranging from grade 1 to grade 12, with the vast majority of writers in grades 1-6. At Renert, it is a big event, and kids who are interested can attend multiple training sessions on the weekends leading to the competition.
Since it was introduced to Calgary 7-8 years ago, the numbers have soared, and this year more than 600 students wrote the competition in Calgary. In days past, when numbers were smaller, awards were given to all students in the top 25% in Canada. As numbers increased, the criterion became far more stringent, and nowadays one has to rank in the top 10% in Canada in order to be invited to the award ceremony (or, in the alternative, to rank among the strongest 3 writers in their region).
This year Renert Students’ performance on Kangaroo was our best ever. With 17 students (!!) receiving awards, Renert is the top school in CANADA (by far) in terms of number of medals received by a single school. Our 17 this year (in no particular order) are: sister and brother Eesha and Ishan, and also Neomi and Jonathan R., Atley (Top in Canada), Marshall, Nolan, Miguel, Marlea, Claire, Oliver, Shilah, Brendan, Liam K. (Top in Canada), Ian, Olivia, and Landry. Once the school size is taken into account, Renert is the only school in the country with (almost) 6 medals per 100 students, more than double compared to any other Canadian top school. This is a direct result of good coaching, the endless work by the students, and the ongoing parental support. Many thanks to coaches Marina, Doina, Vince, Keri, Fatima and Vlad.
While this result will be very difficult to match in future years, we will certainly attempt to do just that. We thank Mount Royal University for organizing the Kangaroo competition, as well as the awards night. It means a lot to the kids, and is all done on a voluntary basis. Stay tuned for more similar postings in the upcoming two weeks, as our kids go to the Calgary Junior High Math Contest (CJHMC) award night, as well as to the Calgary Elementary School Math Contest (CESMC) award ceremony to collect all they have earned.
Enjoy the photos below, and MATH ON! 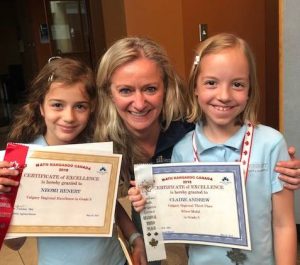 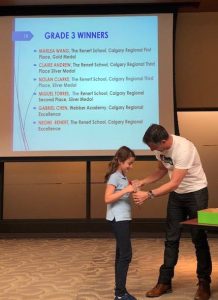 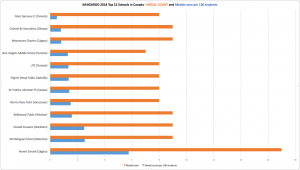 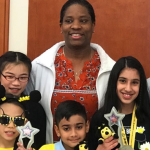 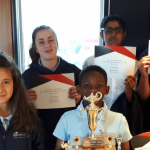